Linda and Jeff's wedding took place at the at the Syria Mosque in Cheswick, PA.
This is the shot from my booth (behind the head table on the stage) when the ball room doors opened.
Stunning, isn't it? 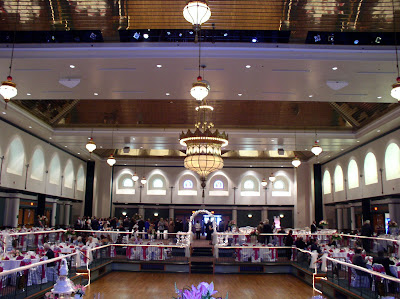 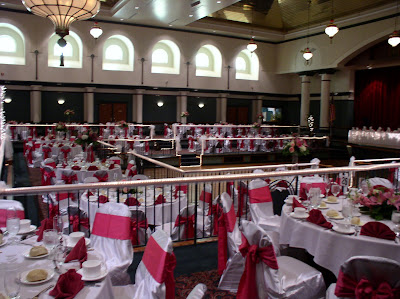 The pictures of Linda's flowers speak for themselves. It is great when all the little details come together.
Can you find the speakers.......? I assure you they are on the stage. (oh, and not behind the curtain.) 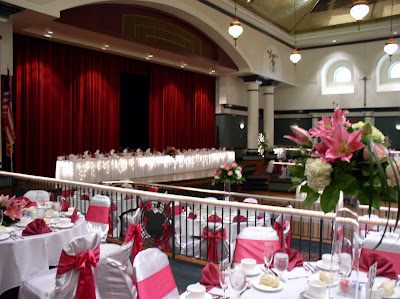 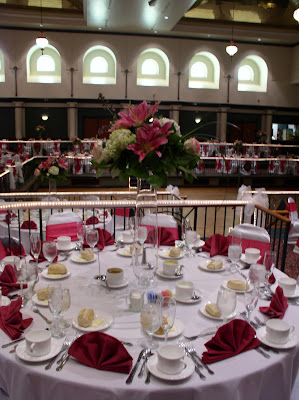 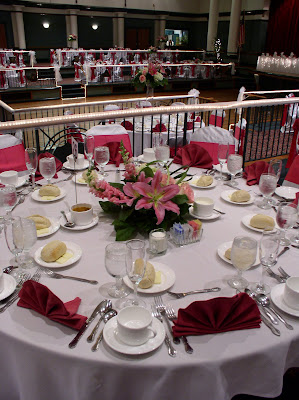 Head Table shot....There is something about symmetry that I love. 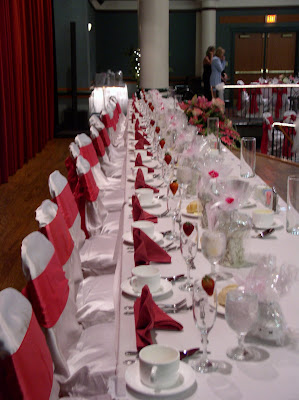 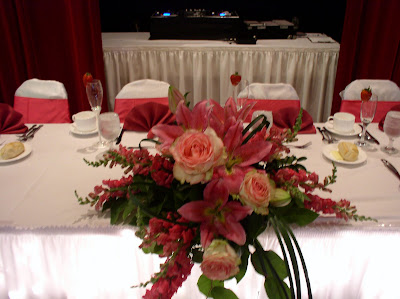 Linda and Jeff cut the Wedding Cake right after the Grand Introductions. This helped out in the long run because dinner took a little longer to serve than we wanted. Since they cut the cake before hand, we had the chance to go right into the formality songs after dinner. 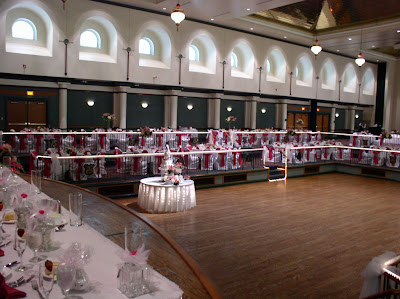 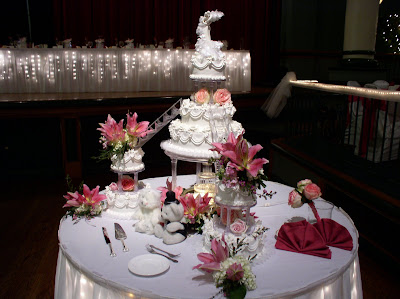 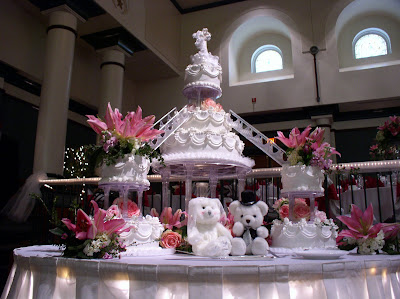 Once the formality dances were over, the floor filled up quickly. Sad to say that we only had about 2 hours of open dancing, but we made the best of it!
About 45 minutes into the dancing we did the Bouquet and Garter toss. I called for all the single people to make their way to the dance floor. In no time there were at least 40 people out there. I see a huge circle of guys around Jeff. They are blocking people from seeing what Jeff was doing..... Next thing I know Jeff pops out of the circle of single guys dressed like an E.R. doctor!!! Surgeons hat, mask and gloves on! LOL (Linda is a ER Nurse)
They really made the event fun and unique to THEM. I always push for adding the little details on your big day to make it unique to you, and not a "cookie cutter" wedding.
I didn't play to many slow songs during the two hours of dancing. I tried my hardest to fit in all of Linda and Jeff's requests, but at the end of the night there was about 8 songs that I just didn't have time to play.
Intro Songs: Can't Hurry Love - The Supremes (Bridal Party)
Do You Love Me - Contours (Linda & Jeff)
Cake: Mac The Knife - Franky
First Dance: When You Say Nothing At All - Allison Krouse
Bridal Party: These Are The Moments - Sara Evans
F/D Dance: The Way You Look Tonight - Franky
M/S Dance: A Song For Mama - Moys II Men
Anniversary Cel Dance: Remember When - Allan Jackson
Posted by Jeremy Ganss - Artistic, Beautiful, Elegant Weddings at 12:47 PM